Jonathan Cauldwell informed me (thanks!), that he is currently porting his Arcade Game Designer to the Amstrad CPC. With the AGD you can design your own small arcade games. It features an own simplistic language, a sprite editor, a screen editor, etc. It will also be possible to port games between the different platforms, so porting back Spectrum games to the CPC

It will also be possible to port games between the different platforms, so porting back Spectrum games to the CPC ?
Κάντε κλικ για μεγέθυνση ...

Version 0.4 is essentially finished with the same functionality as Spectrum version 3.4, minus the MENU and INV commands:

I think I've cleared up the major bugs now so have a play, this version should be capable of producing full games. Get cracking people!

If there are no reports of any bugs I'll put it all together into a tape or disc image and release it as version 1.0.
Κάντε κλικ για μεγέθυνση ...

This features the same critical bug fix for Spectrum version 3.5, as well as fixing a couple of issues in the code/text editor.
Κάντε κλικ για μεγέθυνση ...

Version 1.0 for the CPC, including instructions. This is a .dsk file rather than a snapshot.

The save option will now create an auto-running game.bin file on your disc, which was the last loose end I wanted to tie up. Functionality is the same as AGD 3.5 for the Spectrum, albeit without pop-up menus.

Have fun, and let me know if you encounter any problems.
Κάντε κλικ για μεγέθυνση ...

Here's a new version with a critical bug fix to the palette editor, plus the ability to load saved a game from disc to continue working on it.
http://rapidshare.com/files/716193627/AGD1.1.zip

A word of warning: don't load a file created with version 1.0 into this one, it won't work.

If you spot any bugs, let me know and I'll try and fix them as quickly as possible. I'll look into adding extra features sometime after the next Spectrum update.
Κάντε κλικ για μεγέθυνση ... 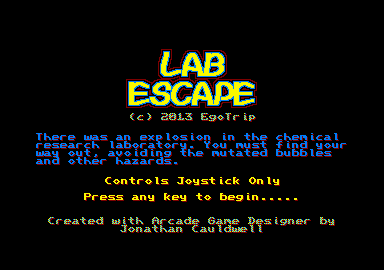 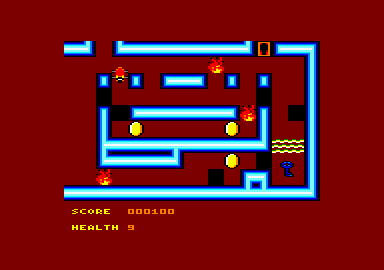 I've fixed a bug in the object initialisation code in the game engine so it should now be possible to place objects on any screen.
Κάντε κλικ για μεγέθυνση ...


Here's the latest version for the CPC. I'd hoped to do more but as 1.3 is long overdue this release will have to do as it is. Hopefully this version should fix a few corruption issues, but do let me know of any more that arise. If I can recreate them, I'll fix them.

Princess Amy was playing around in the abandoned laboratory that exploded in Lab Escape. On the way she had bought a jacket potato for dinner, which she dropped in a puddle of slime. Just as she was about to pick it up, an electric shock caused the potato to come to life. She kept Potato as her pet.

One day not too long afterwards, Potato was trying to do Amy's favourite jigsaw in the garden, when all of a sudden a gust of wind scattered the pieces throughout the castle grounds. Now, you must guide Potato to collect all 30 pieces before Amy arrives home. 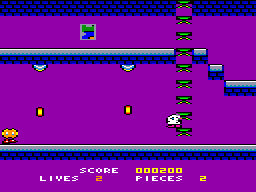 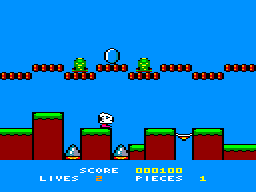 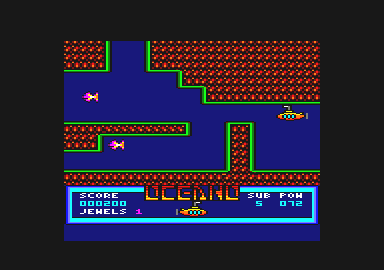 Amy decided to explore the seas in search of 20 fabled power crystals that have long been lost in the ocean. However there are robotic fish guarding them, and acidic bubbles that can damage her sub. She does have a weapon at her disposal in order to disable the fish, but it takes a while to charge so she cannot mindlessly shoot at them. After a short while, the sub will start to sink to the bottom of the ocean. Controls are joystick only (sorry).
Κάντε κλικ για μεγέθυνση ...

Here is a port of my CPC game Oceano for the ZX Spectrum.
Κάντε κλικ για μεγέθυνση ... 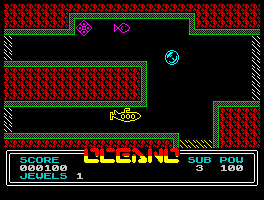 Ι  has been a busy week but the editorless version of AGD has now been ported to the CPC.  Unlike the editor version that runs on the CPC itself, this is a full implementation of all the functionality that exists on the editorless Spectrum and Next/Timex versions.  So MENU, WHILE/ENDWHILE, READ/DATA/RESTORE, CONTROL, EXPLODE and much more are supported.Converting games to or from Amstrad and Spectrum should be a doddle, it's little more than a case of pasting in new graphics.  Beyond that there are palette differences and the Spectrum has KEMPSTON and SINCLAIR as control options where the CPC has JOYSTICK0 and JOYSTICK1.  Redefineable keys are also an option, which was a concern for many with the previous CPC implementation.If you can develop a game for the CPC with this you should be able to port it to the Spectrum with very little difficulty, and vice versa.  There are dozens, if not hundreds of users, mostly Spectrum ATM so hopefully we'll get some crossover and more games for both platforms.  As always, it's all done in a very simple scripting language inspired by BASIC.  There's an example program, Test.AGD included as well as a skeleton program to start you off with your own creations.  There's a directory with some coding templates too - platformer controls, timer bars, pushable blocks and other stuff are covered there.Please take a look.  It's all source ATM so you'll need a C compiler to build the compiler.  I'm still using X86 which is why I've not included executables but if you can compile to x64 do feel free to make your executables available to others.
Κάντε κλικ για μεγέθυνση ...

Lots of bug fixes this time, this has been tested with several games and as part of that I converted a couple of existing Spectrum games to the CPC. All good fun although I'm sure there are people here who'll make better use of the Amstrad's graphics than I ever could so I'll let others look into converting Spectrum AGD games. There are dozens of games that could be given a CPC conversion though.

Multi-Platform AGD is now an all-in-one program. Blocks, sprites, objects, screen layouts, map, font, palette, sprite/object positions... there are editors for everything except code so you'll have to edit the scripts separately. It will even export the game as an assembly language listing; all tested with 2500AD, SjAsmPlus and the assembler built in to WinApe.
Κάντε κλικ για μεγέθυνση ...

Multi-Platform Arcade Game Designer 0.6 (Windows 64-bit)
This is a Windows program that turns programs written in a simple scripting language into assembly language. There are editors for sprites, blocks, screen layouts, there is even a script generator allowing the user to get started with some common templates. The language is considerably more powerful than the Spectrum and CPC versions with WHILE loops, READ, DATA and much more.

AGD will produce games for the Spectrum, Amstrad CPC464 and Timex Sinclair/Next ... with more machines in the pipeline (? BBC ?).
Κάντε κλικ για μεγέθυνση ...