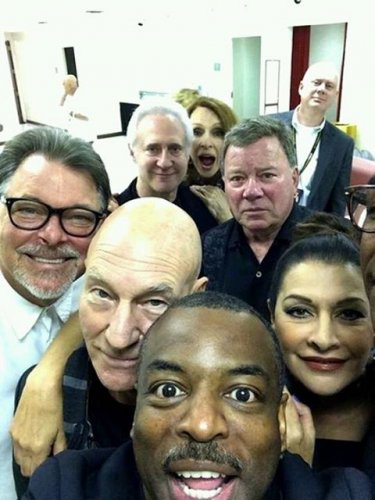 Whoopi Goldberg, who later played Guinan on Star Trek: The Next Generation, described Uhura as a role model for her, recalling that she told her family, "I just saw a black woman on television; and she ain't no maid!"

NASA later employed Nichols in a campaign to encourage blacks to join the service. NASA Astronaut Group 8 yielded the first recruits composed of women and ethnic minorities β three were black (Guion Bluford, Ronald McNair and Dr. Frederick D. Gregory). Dr. Mae Jemison, the first black woman to fly aboard the Space Shuttle, cited Star Trek as an influence in her decision to join. Jemison herself had a minor role on an episode of The Next Generation called "Second Chances," playing a transporter operator named Lieutenant Palmer. Jemison was the first, but not the last, real-life astronaut to appear on Star Trek.

In the 1968 episode "Plato's Stepchildren", Uhura and Captain Kirk kiss. The episode is popularly cited as the first example of a scripted inter-racial kiss on United States television.Originally, the scene was meant to be filmed with and without the kiss, so that the network could later decide whether to air the kiss. However, Shatner and Nichols deliberately flubbed every take of the shot without the kiss so that the shot could not be used.
Κάντε κλικ για μεγέθυνση ...